Next meeting for the June book has been chosen by Paula and is on June 16th. 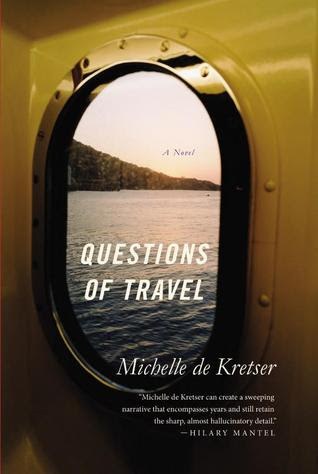 Paula comments: “I was not able to put down Michelle de Kretser’s book Questions of Travel when I found it in my local second hand book shop.
When I read it, I thought, the LLC group would like to know this book, and I believe that there would be good discussion.
It does have violence, but it is in the context of devastation that leads to a migrant’s path, and this is why I think that it is so suitable a theme for now and what our world is facing in the displacement of lives and events that shape destinies.
Michelle de Kretser was born in Sri Lanka and now lives in Australia.
Her book Questions of Travel won the Australian Prime Ministers Award in 2013 as well as the literary Miles Franklin award.
I found it a very moving book of great literary standard.  I’m glancing at the back cover right now and quote Hilary Mantel


“I so much admire Michelle de Kreser’s formidable technique - her characters feel alive, and she can create a sweeping narrative which encompasses years, and yet still retain the sharp, almost hallucinatory detail.  It’s brilliant.”"

Outlook for this summer:

July 21st:
The book chosen from my suggestions was

As I walked out one midsummer morning – Laurie Lee

At the age of nineteen he sets off from his native Slad in Glos and walked to London and then travelled on foot through Spain, where he was trapped by the outbreak of the Civil War. He writes of an age in which it was considered perfectly reasonable for a teenager to set off "tramping" from home, with a minimum of luggage, to walk 100 miles to London, sleeping in fields and barns along the way, to find gainful employment - which turns out to be manual labour. On a whim, he extends the journey to a foreign country with no forward planning, no means of contacting home besides old-fashioned post, and no safety net. In a way it would hardly matter what the subject matter was - the lyrical prose of Laurie Lee is enough to light up the page. The 19-year old Laurie leaves his home in Stroud and starts walking. He walks to the sea (which he has never seen) to London and subsequently the entire length of Spain. Living on his wits and his ability to play a tune on his violin he finds 1937 Spain a country on the verge of civil uprising. Lyrical, hugely evocative of period and place and beautifully written by a natural storyteller and poet.

The other 2 that were suggested were:
A PLACE CALLED WINTER by Patrick Gale

(Notes from an Exhibition/A Perfectly Good Man) A sage, romance, historical fiction, based loosely on truth and a story of self-discovery. A shy but privileged elder son, Harry Cane has followed convention at every step. Even the beginnings of an illicit, dangerous affair do little to shake the foundations of his muted existence - until the shock of discovery and the threat of arrest force him to abandon his wife and child and sign up for emigration to Canada.Remote and unforgiving, his allotted homestead in a place called Winter is a world away from the golden suburbs of turn-of-the-century Edwardian England. And yet it is here, isolated in a seemingly harsh landscape, under the threat of war and madness that the fight for survival will reveal in Harry an inner strength and capacity for love beyond anything he has ever known before. an irresistible, searching and poignant historical novel of forbidden love, secrets and escape.


The Man who Forgot his Wife – John O’Farrell.

Several novels including The Best A Man Can Get, This is Your Life, May Contain Nuts and The Man Who Forgot His Wife. He has also written 2 very successful history books. A former comedy scriptwriter for shows such as Spitting Image and Alias Smith and Jones, he is the founder of the satirical website NewsBiscuit and is well known for appearing on TV programmes including Grumpy Old Men, The Review Show and Have I Got News For You.

Lots of husbands forget things but Vaughan has forgotten he even has a wife. Her name, her face, their history together, everything she has ever told him, everything he has said to her - it has all gone, mysteriously wiped in one catastrophic moment of memory loss. And now he has rediscovered her - only to find out that they are getting divorced. This book is the funny, moving and poignant story of a man who has done just that. And who will try anything to turn back the clock and have one last chance to reclaim his life. "It's a rare treat to come across a novel that is both comic and thoughtfully acute about love, and life, and stuff... Hilarious and heart-tugging, this is indeed a memorable comedy"

August 2016 will be our Garden Party and we’re suggesting anyone can bring a poem to read.
Also bring books to swop.

September 2016 :
Theme month and we have decided on
French authors.
So any book written by/about a French author, in English or French.

Remember, Book Club is always on the 3rd Thursday of the month.

For more information about any of the above or our next meeting and venue, please contact:
LLC secretary: lunchclubgascogne(at)gmail.com
or you join the blog here:

Posted by Ladies Club d'Armagnac at 11:28