It is with great pleasure that the Committee invites you to our 2016 April lunch at a new venue, 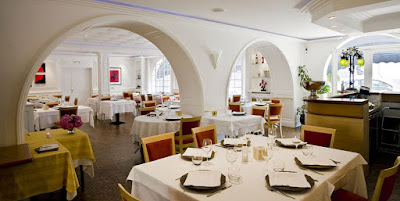 Deadline for places is 3rd April,
so please hurry!

It may be a good idea to organise car sharing with other members.

Please let us know that you wish to attend.
There is a small car park opposite the hotel on the (Riverside) on Quay Jaubert (turn sharp first left as you go over the bridge).
Info parking in Condom please click here

If you are unable to submit the emailed Form
please send us an email lunchclubgascogne@gmail.com

Your cheque for 17 euros should be made payable to Ladies Lunch Club de l'Armagnac and put into an envelope with your name on it.
Please remember to wear your name badge.
A list of members who have booked will be sent out in due course.


Looking forward to seeing you all on 12th April.
Best wishes from the LLC Committee
Posted by Ladies Club d'Armagnac at 23:03 No comments:

Come to the Art and Nature exhibition SUNDAY 17th April 2016

Why not come along to the forthcoming

After a lovely afternoon making cards in The Salle de Fetes in Reans, we thought it would be a good idea to remind members that you would be most welcome to join us.  The APR and LLCA craft groups meet on the 1st and 3rd Tuesdays of the month, from 2.00 pm to 5.00 pm, and anyone wishing to do patchwork or needlework can go every Tuesday.  It is a great place to learn a new skill and practice your French. 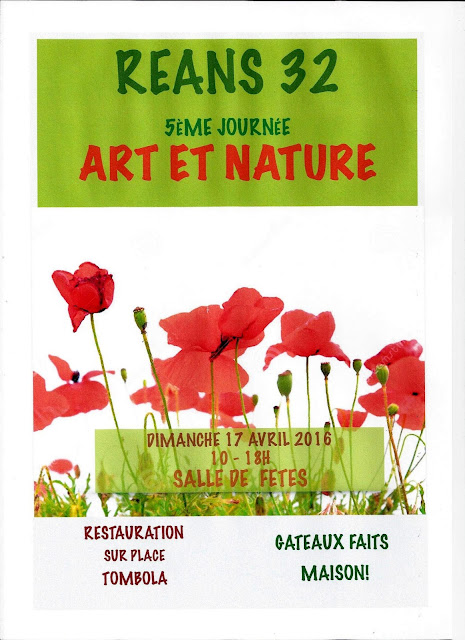 The APR (Aide Partage Rencontre) is an Association started by Mme le Maire – Gabrielle Clave,
mainly for the local residents of Reans, after seeing the various handicrafts made by members of the LLCA, but anyone can join on payment of an annual subscription of €10.

Since the Ladies Lunch Club de l’Armagnac became an Association, the two Clubs have begun to share their talents, by their weekly meetings, and by two Exhibitions/Events a year,

in Spring (Art and Nature) and
Christmas (Marche de Noel).

Why not come along to the forthcoming

and be inspired by what we do. Although organised by APR many of our LLCA members will be exhibiting.
The attached ‘flyer’ was designed by one of our Members – Karin Terry, and is just one example of the talents we have in our Group.  Put the date in your diaries now and spread the word.  Bring along friends and neighbours for a coffee and cake and an enjoyable outing.

If you have any questions please contact our LLC secretary <lunchclubgascogne@gamil.com>
for Pam or Diana

Posted by Ladies Club d'Armagnac at 10:47 No comments:

Next month’s Garden Group outing is a trip to

Due to his many commitments he is only available on Saturdays so, for this reason, we have decided (exceptionally) to change the day of the outing from Thursday to
Saturday 9th April.

He has kindly agreed to give us a guided tour of the centre followed by a talk about roses.
Hoping that many of you will be able to join us, please consider car-sharing where possible.

Gary has a HND in Amenity Horticulture, a BSc (honours) Degree in Landscape Management and over 30 years of practical experience in the Horticultural trade. He has been employed in Garden Centre Management, ran a Landscape Gardening Company in the UK and for 10 years before moving to France he worked as a Lecturer at Hadlow College (a subsidiary of Greenwich University) where he initially taught Retail Horticulture and Business studies to staff of several different major Garden Centre chains, he then went on to run the Landscape Management Degree.

Pat and Caroline will look forward to seeing you then - for any enquiries you can contact them via
<lunchclubgascogne@gmail.com>

Posted by Ladies Club d'Armagnac at 18:45 No comments:

We meet for the March 2016 bookclub on

We have chosen a theme for this month:
Literature on Plants & Gardens 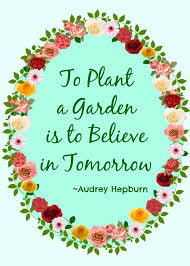 (your choice of any book relating to plants & gardens).

Remember, Book Club is always on the 3rd Thursday of the month.

For more information about any of the above or our next meeting and venue, please contact:
LLC secretary: lunchclubgascogne(at)gmail.com
or you join the blog here:

follow by email (click on this link if you want regular info) or our
facebook page (see widget on the blog)
Ladies Lunch Club de l'Armagnac.

Posted by Ladies Club d'Armagnac at 23:52 No comments:

Today is International Women's Day,
which is celebrated on 8th of March every year.
In some countries it is a National holiday.

"Governments have always tried to crush reform movements, to destroy ideas, to kill the thing that cannot die. Without regard to history, which shows that no Government have ever succeeded in doing this, they go on trying in the old, senseless way.  -
Women are very slow to rouse, but once they are determined, nothing on earth and nothing in heaven will make women give way; it is impossible.”
- Emmeline Pankhurst

The earliest Women’s Day meeting was held in February 1909 in New York; it was organized in remembrance of the 1908 strike of the International Ladies' Garment Workers' Union in the US.

In August 1910 an International Women's Conference was organized by the Socialists in Copenhagen, Denmark.
The American activist May Wood-Simons inspired German suffragette Luise Zietz, Clara Zetkin and Rosa Luxemburg proposing to establish an annual 'International Woman's Day'.
Delegates (100 women from 17 countries) agreed with the idea as a strategy to promote equal rights, including suffrage for women.

The very first  IWD was celebrated on March 19, 1911 by over a million people in Austria, Denmark, Germany and Switzerland. In the Austro-Hungarian Empire were 300 demonstrations.
In Vienna, thousands of women demonstrated and carried banners honouring the martyrs of the 1848 March Revolution and the Paris Commune, which had already demanded human rights for women in March 1871.
Not to forget the first declaration for women's rights by Olympe de Gouges in 1793 in the French Revolution.

In London there was a march from Bow to Trafalgar Square in support of women's suffrage on
8 March 1914.
Sylvia Pankhurst (daughter of Emmeline Pankhurst) was arrested in front of Charing Cross station on her way to speak in Trafalgar Square.

Women demanded that women be given the right to vote and to hold public office.
They also protested against gender discrimination in employment.

In 2015 UN Commission commemorated the 20th anniversary of the 1995 Beijing Declaration, which remains the world’s best blueprint to achieve gender equality and women's empowerment
One of the great achievements of the Beijing Conference was the recognition that women’s rights are human rights.
17,000 participants and 30,000 activists gathered then to voice and demonstrate their support for gender equality and women’s empowerment.

Finally it was understood that if women and girls cannot fully realize their rights and aspirations, development in the society will be impeded.

Gender parity in primary education has been widely achieved, but completion rates and the quality of education are not high enough across all countries.

More women have been elected to public office but we are still far from parity.

More women than ever before are participating in the work force, but women generally earn in average 30% less than men and,
in rich and poor countries alike,
carry a disproportionate burden of unpaid care work which deprives them of time for valuable pursuits like earning money, gaining new skills, and participating in public life.

And, while more laws exist to protect women from domestic violence, sexual and gender-based abuse or discrimination continue to occur on every continent and in every country, reaching horrific levels where there is war or civil conflict.

The International Woman’s Day theme for 2016 is Pledge for Parity.

Therefore let's join supporting this call for our children and grandchildren to realize a world in which every woman and girl has the opportunity to fulfill her potential and enjoy equal rights and status.

The challenge in our lives is to learn from difference, and at the same time in a perfect balance with difference, understand that we are all human in a universal sense.

We live in a world where decisions demand
either /or  - instead of as well as -
which would be trying to make a world that is inclusive and joining.

Life is about shared humanity in perfect balance with difference.

Each one of us in this room is a unique combination of millennia upon millennia of heredity and environment combined in a way that could never have happened before and could never happen again.

Anybody who has ever met a baby knows there is a person already in that little human and it is our job as the parents and families and allies of children to help them to become who they already are.

Usually older women have more power than younger women – not always, but usually.

But we must become allies.
So it is especially important for us older women to listen as much as we talk.

If we listen to each other’s stories, and we figure out what changes will be of help to most of the people
- the younger women and children - then we have a chance to come out with both better changes,
and more community.

Therefore let's share our our quest on this pledge for parity.

This speech was held today on the occasion of Ladies Lunch Club luncheon on 8th of March 2016.

Posted by Ladies Club d'Armagnac at 22:19 No comments: