on Tuesday 11th FEBRUARY 2014
at the  Solenca/Nogaro

We are hoping for your support and ask you to arrive by 10.45h when coffee will be available for a prompt start to the meeting at 11am.

Lunch follows the AGM and there is a subsidy of €6 per 2013 member attending both the AGM and the lunch.
Please note the lunch cost has risen from €16 to  €17 per head due to the TVA increase.

The menu is as follows: 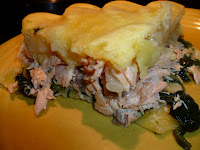 (fotos only suggest to increase your appetite)

Please use the booking form to indicate attendance at the AGM/lunch using the  link sent by email.
Bookings will close on Friday 7th February at noon.

If you wish to vote on the name for the club and are unable to attend the AGM you may email your preference.
The suggestions are:

For more information about the Ladies Lunch Club or any of the above or our next meeting and venue, please contact: Ladieslunchclub secretary:  lunchclubgascogne(at)gmail.com
or you join the blog here: follow by email
(click on this link if you want regular info)
or our facebook page (see widget on the blog)
Gers Ladies Lunch Club

Posted by Ladies Club d'Armagnac at 18:12 No comments:

Bookclub review and outlook February till May 2014

Our numbers were a bit depleted on last meetin but we had lively discussion about the Alice Munro short stories we had read.

They were all quite diverse stories but the common denominator running through all, was how gifted and perceptive she was as a writer.
Most are beautifully written, cleverly crafted short stories with characters, not always likeable, and sometimes rather uncomfortably realistic.  Whether one likes or dislikes that genre and her particular style, she was obviously the grande dame of short stories.
These were the books some of the members had read:  The Moon’s of Jupiter, Runaway, The View from Castle Rock, The Beggar Maid and The Progress of Love.


February bookclub meeting will be on February 20th, 2014 and the book chosen is

March bookclub meeting is on March 20th, 2014
and the book chosen is

For April we have chosen a book by an English author who is living near Auch in the Gers.

Her name is Amanda Hodgkinson and she would like to come and meet us and talk to us about her writing etc.  She does write in La Depeche every Sunday; short, sometimes amusing observations of life of an ex pat in France.
It would be interesting to read her book before she visits us (date to be confirmed depending on her schedule) and her 1st book is 22 Britannia Road.

Amanda Hodgkinson has just released Spilt Milk which you could also read, if you fancied it.

Cathie has suggested 4 books, which would now be for the May 2014 meeting.
These are listed below so at the February meeting we could choose the book we want to read for May.
Think we’ve had enough rain for now!

Jon McGregor - If Nobody Speaks of Remarkable Things

'This novel owes as much to poetry as it does to prose. Its opening, an invocation of the life of the city, is strongly reminiscent of Auden's Night Mail in its hypnotic portrait of industrialised society...An assured debut' Erica Wagner, The Times. On a street in a town in the North of England, ordinary people are going through the motions of their everyday existence - street cricket, barbecues, painting windows...A young man is in love with a neighbour who does not even know his name. An old couple make their way up to the nearby bus stop. But then a terrible event shatters the quiet of the early summer evening. That this remarkable and horrific event is only poignant to those who saw it, not even meriting a mention on the local news, means that those who witness it will be altered for ever. Jon McGregor's first novel brilliantly evokes the histories and lives of the people in the street to build up an unforgettable human panorama. Breathtakingly original, humane and moving, IF NOBODY SPEAKS OF REMARKABLE THINGS is an astonishing debut. 'The work of a burning new talent ...Jon MacGregor writes like a lyrical angel' Daily Mail

A dangerous rescue attempt in Michigan has captured the attention of the entire country. A two-year-old girl has fallen down a mine shaft. Ursula Wong is the only child of a poor family and referred to by one member of the TV audience as 'half-breed trailer trash', not worth all the expense.

But Ursula is the last of her family line and her story explodes into a gorgeous saga of culture, history and heredity. Ursula's forebears include a second-century BC Chinese alchemist; an orphaned consort to a Swedish queen; and Ursula's great-great-grandfather, Jake Maki, a miner who died in a cave-in aged twenty-nine.

Ursula's fate echoes those of her ancestors, many of whom so narrowly escaped not being born that any given individual's life comes to seem a miracle.

At the heart of this novel lies the fictional village of Ulverton. It is the fixed point in a book that spans three hundred years. Different voices tell the story of Ulverton: one of Cromwell's soldiers staggers home to find his wife remarried and promptly disappears, an eighteenth century farmer carries on an affair with a maid under his wife's nose, a mother writes letters to her imprisoned son, a 1980s real estate company discover a soldier's skeleton, dated to the time of Cromell...

Told through diaries, sermons, letters, drunken pub conversations and film scripts this is a masterful novel that reconstructs the unrecorded history of England.

'Sometimes you forget that it is a novel, and believe for a moment that you are really hearing the voice of the dead' Hilary Mantel

An unforgettable portrait of a woman bravely confronting loneliness and despair in her quest for self-determination, Jean Rhys's Good Morning Midnight includes an introduction by A.L. Kennedy in Penguin Modern Classics.
In 1930s Paris, where one cheap hotel room is very like another, a young woman is teaching herself indifference. She has escaped personal tragedy and has come to France to find courage and seek independence. She tells herself to expect nothing, especially not kindness, least of all from men. Tomorrow, she resolves, she will dye her hair blonde. Jean Rhys was a talent before her time with an impressive ability to express the anguish of young, single women. In Good Morning, Midnight Rhys created the powerfully modern portrait of Sophia Jansen, whose emancipation is far more painful and complicated than she could expect, but whose confession is flecked with triumph and elation. One of the most honest and distinctive British novelists of the twentieth century, Jean Rhys wrote about women with perception and sensitivity in an innovative and often controversial way.

This is hopefully a good list to make a choice. We hope you enjoy the read and see you on upcoming February meeting.
------------------------------------------------------
For more information about the bookclub or
any of the above or our next meeting and venue, please contact:
Ladieslunchclub secretary:
lunchclubgascogne(at)gmail.com
or you join the blog here:
follow by email
(click on this link if you want regular info)
or our facebook page (see widget on the blog)
Gers Ladies Lunch Club

Posted by Ladies Club d'Armagnac at 00:04 No comments:

Things to do in February with Marloes

What we do in our spare time?

On 8th February a figurine workshop is being offered by the artist Marloes Nolten at her
atelier Gounesse in Panjas. 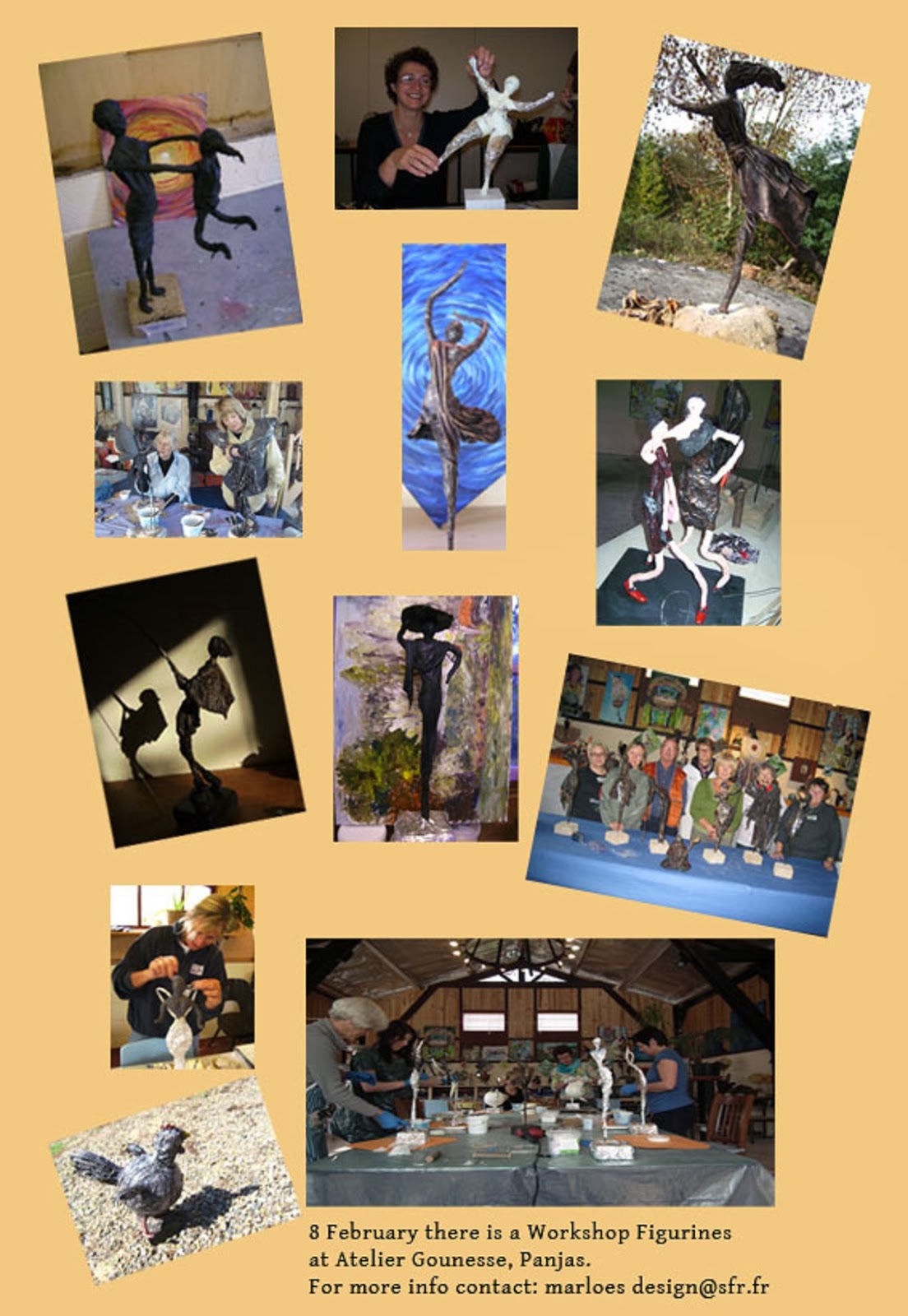 LUNCH ONLY at the

Just to confirm the lunch at The Solenca Hotel on Tuesday 14th January is NOT an Annual General Meeting.
This AGM will take place in February, 11th.(see blog post below).
The menu:


Please note the higher price of 17 Euro which is mainly due to the change in VAT.

If you wish to join us on the 14th and please reply by 12.00 on Friday 10th January. (Members will please use the confirmation form sent to them by email.)

If there are any changes you need to make after this time, please contact Sue Sullivan.
Jane will not be contactable after Friday, so please don't email or telephone her.

Please bring the correct money in an envelope with your name on to the Luncheon.

Please do not forget a second envelope with your completed membership form, which was sent to you per email and €5 Euro subscription for 2014.
Non-members can subscribe at the Luncheon.

We look forward to seeing you


Please confirm your participation NLT January 10th and for more information about any of the above or our next meeting and venue, please contact:


Due to the many  pressures of the festive season, we propose moving the AGM (Annual General Meeting) to February 2014.

We need more time to gather our thoughts and this will hopefully lead to a more productive meeting.

An important subject for the LLC in 2014:

again at the  Solenca/Nogaro, followed by lunch at 12.30h
with the usual subsidy of €6 for those attending the meeting.

We do ask for your understanding of this change in date, and hope it will mean that more of you will be able to attend.

We appreciate that this time of the year is very busy for everyone but ask you to give the LLC five minutes of your time so that we can prepare for the
AGM (Annual General Meeting) in February 2014.